During the Stockholm Beer and Whisky Festival, last October, I had the pleasure of hosting some tastings with one of the most passionate Glenfarclas fans I have met. What makes sharing a stage with Anders Fridén unusual is his day job as lead singer with ’s infamous heavy metal band In Flames. The clash of cultures could not be greater. Whisky is traditional, and single malt does not get more traditional than Glenfarclas. Our brand conjures up images of green tweed, old school ties and brown suede shoes. The heavy metal world of dreadlocks, tattoos and body piercings is alien territory for me, but as the tasting progresses, this clash of cultures seems to work.
Since forming in 1990 In Flames have been remarkably successful, selling more than two million albums. Their most recent album was named the Best Swedish Album of the decade by readers of ’s national newspaper.
What you might wonder appeals about Glenfarclas to a heavy metal star? Anders Fridén admires our spirit of independence, the Grant family’s passion for doing things their way. He sees parallels with the way In Flames has carved their niche. He also enjoys relaxing with a good dram, particularly after a night on stage. When someone who is a leader in their field comes to us with a real passion for our whisky, it is a pleasure to work with them.
Anders’ favourite Glenfarclas is the 105, and from The Family Casks, it is the 1973, by coincidence also his year of birth. And my favourite In Flames track; check out Come Clarity on you tube…. http://www.youtube.com/watch?v=EJojO8gNunI

A Speyside life is anything but ordinary.

Posted by Glenfarclas at 09:11 No comments:

One of our strengths at Glenfarclas is our stock of old whisky. We have casks from every year from 1952 to the current year. This is unusual, other larger whisky distilling companies tend to focus on blended whisky, and you do not need stock of 25 year old single malt to produce an 8 year old blend. Meanwhile other small companies have had years when they did not produce because times were tough.
So in the spirit of ‘we can, and we don’t think anyone else can’ back in 2007 John Grant decided that we should release a single cask from every year from 1952 to 1994. As I am sure you are aware we have called this collection The Family Casks, and it has caught the imagination of whisky drinkers around the world. So much so, that some casks sold out quickly. As we wish to offer as many different years as possible, we have bottled further casks. 1952 has been one of the more popular years, and we have now bottled three casks from 1952, which leaves just one cask of 1952 in our warehouse.
However we have a problem. Thanks to the thirst of the angels, the strength has dropped and is now below 40% vol. Scotch whisky is very tightly regulated to protect the quality of your dram. The regulations state a minimum strength for Scotch Whisky of 40% vol., hence the liquid remaining in 1952 Cask 1711 is no longer whisky. What can we do?
Normally such a cask would be vatted with others so the resulting liquid is over 40%, and thus can be termed Scotch whisky. Alas we have no other casks from 1952. We could use another cask from another year, but the resulting bottling would not be a 1952 Glenfarclas.
The regulations that govern Scotch whisky production also state that Scotch whisky must have been matured in oak casks for a minimum of three years. This is a bit of a hurdle if you are building a new distillery, as in effect you must wait three years before you have whisky to sell. Hence some new distilleries have released bottlings of new spirit with no reference to whisky on the label, to bring in some much needed cash in their early years.
With this in mind I thought I would investigate whether we would be able to sell 1952 Cask 1711 as ‘Glenfarclas 1952 Old Spirit’ without referring to whisky on the label. However this would also contravene the regulations, as the inclusion of the word Glenfarclas implies that the liquid is whisky, whether or not the word whisky appears on the label. Not the answer we were hoping for to solve our dilemma. We could if we wish bottle the liquid as J.& G. Grant Spirit Drink, but that does not sound particularly appealing.
What else could we do? My suggestion that we enjoy the last remaining drops of 1952 at the staff Christmas party did not get approval! 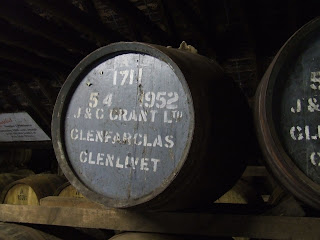 Posted by Glenfarclas at 05:49 No comments: